I know what you’re thinking. I’m a special kind of combination of crazy and stupid that normally puts you in an institution, but hear me out. Drew Brees is the best quarterback of the last 15 years, and there is nothing you can do about it. In two pages you’ll want to profess your unconditional support for the Drew Brees campaign.

When he came into the league, he was a quarterback from perennial cupcake Purdue University, a 6 foot tall kid who was too short and too slow to be somebody. He began his career with the Chargers, playing a single game his first career season in 2001. This was the last time he played less than 11 games in a single season. A warrior since the beginning, Brees has played in 15 or 16 games in 13 of his 15 seasons, assuming he finishes the year out healthy this year. He has a scar on his face for God’s sake, the dude is tough as nails. His durability is incredible, but nobody signs a quarterback because they are durable. They want those sweet, sexy big time numbers. And Brees has the sexiest numbers in the room. The kind of numbers that make your palms sweat from across the room. You know what I mean. Long, toned passing accuracy, voluptuous TD numbers that make your heart jump just thinking about all of those bombs, a sultry QB rating that sends your mind to another dimension. These are the kind of numbers you hope you can take home tonight and finally get lucky with.

Brees is one of 5 members of the 400 TD club. All of the hoopla surrounding Tom Brady when he threw TD #423, and little old Drew Brees silently threw #419 the same week. In two less seasons than Brady has under his belt. A guy that can’t even see over the offensive line has as many TDs as Terrific Tom, a favorite for the award Brees deserves, a model, and the husband of a super-model. If that’s not inspirational, you should get your heart checked.

That’s the face of a fucking warrior. He literally saved New Orleans from drowning. Singlehandedly.

Within the next three weeks, Brees will throw for his 60,000 yard. A feat accomplished by only three other players in the history of the NFL. One of them is named Manning, none of them are named Brady. For all intents and purposes, it seems that the legend that is Peyton Manning has played his last decent season. A storied career played out after almost 20 years will come to a close, and his yardage numbers will settle somewhere around 73-75,000, an all-time record. Manning is on the very cusp of 40, the NFL equivalent to great grandpa Eddie, who ruins every family gathering with his WWII flashbacks and obnoxiously loud breathing machine. Drew Brees is 36 years old, but physically is more akin to Eddie’s younger brother Eugene, who still runs the occasional marathon and hasn’t sat down since the 50’s. Conservatively we can put the number of productive seasons left in Brees’ career at 4, stretching to possibly 5. If Brees throws for a 16 game career low of 3,500 hundred yards in each of his final four seasons,  he will end his career with over 75,000 yards. And this number can seemingly only go higher. You read that correctly. This scrawny kid from East Jesus Nowhere (Purdue University) is on track to become the most prolific passer in the history of the game. And he did this with a team that was the pinnacle of mediocrity (how about that? This is why I get paid the little bucks) for the majority of his career, A team that was over .500 just six times in the last 15 years, unlike the Manning-Brady powerhouse football teams that inflated their numbers. These Saints teams were all Brees, all the time. And other teams knew it. And they still couldn’t stop it. He was playing with so little help it’s like everyone wanted him to fail.

A little exercise to help you understand the situation that Mr. Brees here was placed in. Name five receivers that have caught a Drew Brees pass.

Time’s up. Marques Colston was probably on your list. A great receiver, no doubt. but even he was surprised that he caught the ball most of the time. Yes Marques, that’s a football. And yes it should be in your hands.

Jimmy Graham is next, a physical specimen to say the least. But far from a first ballot hall-of-famer. 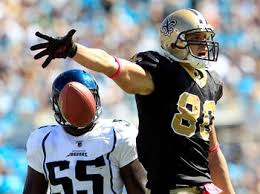 That’s not how you catch a ball Jimmy.

A possible Jeremy Shockey throwback may have snuck into your list. This guy was a great tight end for a few years. He didn’t even like football, just the taste of leather.

Then the names run dry. No all time greats like Reggie Wayne, Marvin Harrison, or Randy Moss. No current superstars like Gronk or Demaryius Thomas. Chances are you didn’t get 5. That’s ok, nobody does. Brees is essentially throwing to five of his twitter followers, defenses know exactly what’s coming, and he still has 60,000 yards. Put Brady or Manning on the field with the pod network, and the team is on the fast track to the number one draft pick. Put Brees on the field with the pod network, and Marty sets an all time receiving yards record, Jonathan and Brendan dominate the red zone, Keith is a pro bowl selection, and my neck snaps as we hurtle towards the superbowl at mach 5, leaving me out for the year. Brees makes the best chicken salad this side of the Mississippi, and nobody even knows that it’s chicken shit. He polishes turds until they’re so bright nobody knows they’re looking at 5 receivers who should never even think about seeing an NFL field. Brees took a team to the goddamn super bowl, and their next best player was Pierre Thomas, and their defense was 25th in the league. Show me another guy that can do that, and I’ll show you Drew Brees looking in a fucking mirror. Damn he’s good.

Drew Brees plays in New Orleans, which if you are old enough to be reading this, you will remember the hurricane that rocked the city in 2005. Legend has it that Drew Brees stood outside on the beach, daring Katrina to come at him. The 2010 super bowl, a game in which the Saints represented a glimmer of hope for a city rebuilding, was taken over by Drew Brees. The Saints won, and the win represented a city that had come back from the brink of destruction, like a black and gold phoenix soaring through a water-logged marsh. And on the back of that phoenix was Drew Brees, wearing nothing but a football helmet, pointing his fire-spear towards the heavens, throwing bullets at anything that challenged the city. In the words of the legendary Starship, he built this city, not on rock and roll, but on the gigantic balls of Drew Brees.

There are more stats, like his top ten all time passer rating, or his completion percentage of 66.2%, which is first all-time. Ever. Nobody has completed a higher percentage of passes in the history of the NFL. And he’s throwing to guys that are the bottom of the grungiest, dirtiest barrel. Drew Brees is a fucking legend, and is better than any other quarterback that has stepped foot on the field in the last decade and a half. And there is nothing you can do about it.